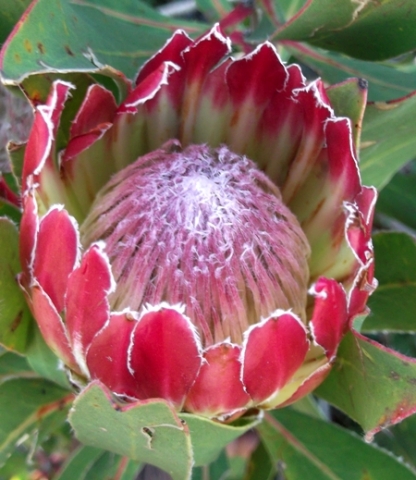 Before the styles burst from their protective coverings in the young Protea obtusifolia flowerhead, the woolly perianths cohere. The purplish grey tips lean inwards in a rounded clubhead, resembling players of a sports team conferring in last-minute consultation before their big match.

The involucre, recently opened, forms a wall around the closed perianths. Bract margins are woolly like the perianths, their coloured surfaces smooth and shiny, tasked with announcing the newly arrived flowers that bear food.

The flowerhead is oblong to obconical, meaning that its temporarily cylindrical shape widens at the tip when fully open, reaching a cone-shape that narrows to the base. The flowerhead becomes 9 cm to 12 cm long and at its tip 5 cm to 8 cm wide.

The involucral receptacle at the base of the flowerhead also becomes cone-shaped, about 3 cm wide and 1 cm tall. There are six or seven rows of bracts growing upon it (Rourke, 1980).