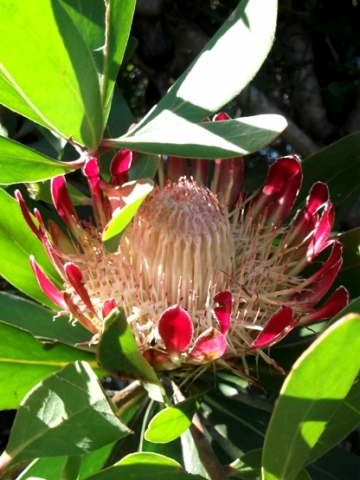 The old Protea obtusifolia flowerhead has straight styles ending in dark pollen presenters. Three of the four perianth sections of each floret have pollen in the anthers at their tips, the fourth one is infertile, a staminode.

The styles freed from their perianth coverings are erect in the widening space between the coloured involucre and the central cone of closed florets. The inner row of involucral bracts are spread widely, separated from each other. The colouring is darker near the tips of the paddle-shaped bracts, their margins whitish with hairy fringes. This flowerhead is sheltered among some leaves (Rourke, 1980).