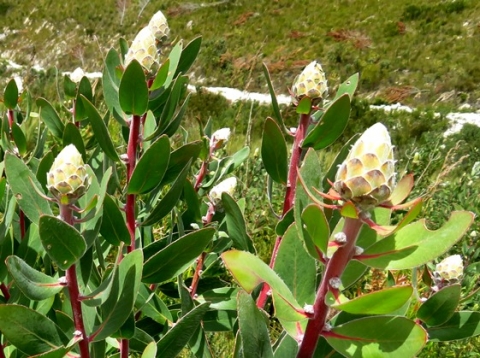 The stem-tip buds of Protea mundii show themselves above the leaves. They are cone-shaped to slightly incurving. The lower involucral bracts are broad and round-tipped, growing in five or six rows. The flowerhead is small compared to those of most larger Protea species.

The open involucre is shaped like a parabola, only narrowing again at the top after flowering when access is mostly denied to insects during fruiting. By then the base will bulge where seed production is underway.

The inner, longest involucral bracts that dominate the floral appearance in the flowerhead's prime, are oblong and creamy white. The pink-flowering form of this Protea is rare, or at least less common than the white one. The lower, more rounded bracts in picture have dark-brown tips and paler lower parts, green-brown or yellow-brown to multicoloured.

The bract surfaces have silky hairy as well as hairless parts. The margins are lightly to thickly fringed with longer hairs, more conspicuously near the tips of the inner ring of bracts.

The perianths of up to 7 cm long are straight with tawny hairs at their tips. The pollen presenters at style-tips of open florets are marginally taller than the involucre. They are thread-like with thickened to club-shaped tips that turn black as they dry.

Flowering happens from midsummer, peaking before midautumn and continuing sporadically until early spring. The photo was taken in January.