Home » GENERA P » Protea » Protea mucronifolia
Back to Category Overview
Total images in all categories: 11,411
Total number of hits on all images: 6,178,363 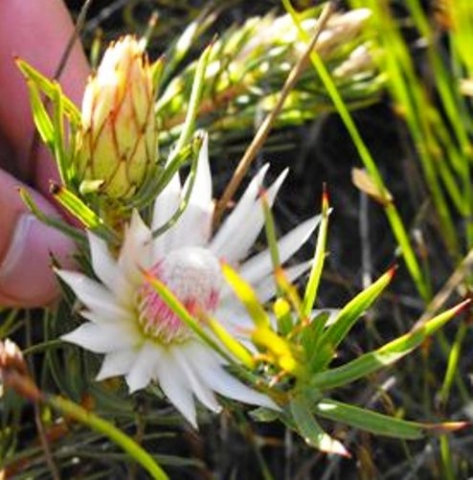 Protea mucronifolia is another of the highly threatened plant species still finding refuge at the Elandsberg Private Nature Reserve. It is believed that until the beginning of the 19th century this protea occurred along the wagon route from Wellington to the Roodezand Pass and westwards to the Berg River. Towards the end of the first British occupation of the Cape Colony in 1803 James Niven managed to establish this plant in England. It for instance flowered in Kew Gardens and elsewhere in England by 1806.

Soon after this peak in popularity of the plant its trail in the literature goes cold.  It was only rediscovered by 1960. Agriculture had by now reduced the distribution area of this and many other valuable plants of the renosterveld to the west of the Elandsberg Mountains. Today only one or two farms still have some specimens of it growing in nature. The habitat has shale and clayey soil around the foot of the mountain. The dagger-leaved protea flowers in spring, although a few flowers can still be found in summer. Successful cultivation has been noted, probably not on a large scale. The species is similar to P. odorata, although readily distinguished by the leaves, flowers and blooming season.

It may be interesting to know whether this plant is still being cultivated in Europe in continuation of those early efforts (Rourke, 1980).