Home » GENERA P » Protea » Protea longifolia flowerhead
Back to Category Overview
Total images in all categories: 11,792
Total number of hits on all images: 6,949,297 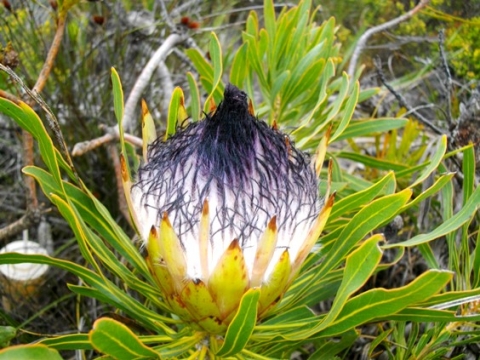 The flowerhead of Protea longifolia varies much in length, from 8 cm to 16 cm. This variability is associated with the geogaphical location of the plant.

The smaller ones grow in the southeastern part of the species distribution near Bredasdorp and the Soetanysberg where the involucres are greenish and the plants smaller, about 50 cm tall. To the northwestern extreme of the distribution, the Hottentots Holland Mountains, Kogelberg, Caledon and Fernkloof, plants typically reach heights near 1 m, occasionally up to 1,5 m.

The involucre colouring of P. longifolia varies from whitish to pink or greenish, the bracts growing in five or six rows. The individual floret inside the flowerhead, a straight perianth, has three anthers; the outside one sterile, only a staminode.

Once the style is released from its perianth covering, the straight pollen presenter at the style tip becomes visible, showing a slight kink where the two are joined (Rourke, 1980).