Home » GENERA P » Protea » Protea laurifolia
Back to Category Overview
Total images in all categories: 11,933
Total number of hits on all images: 7,175,181 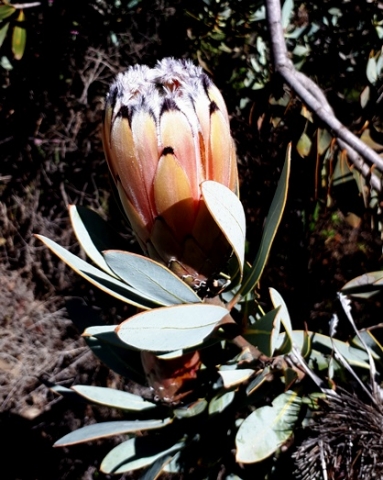 Protea laurifolia, the greyleaf sugarbush or in Afrikaans the louriersuikerbos (laurel sugarbush) after the specific name that likens the leaves to those of the laurel tree, is a large erect shrub to a small tree of up to 8 m. The stout, short main trunk reaches 30 cm in diameter; the species does not resprout after fire.

The grey-green to blue-green leaves are elliptic, hairless when mature. Cream or pink flowerheads with black beard on the involucral bract tips become about 5 cm in diameter. Flowering happens in late autumn and winter.

The distribution is widespread in the Western Cape where it is endemic, from Nieuwoudtville and Piketberg to the Little Karoo. The photo was taken at Hebron farm on the mountain near Piketberg during August.

The habitat is sandstone slopes in arid fynbos and renosterveld. The species is not considered to be threatened in its habitat early in the twenty first century (Rourke, 1980; Vlok and Schutte-Vlok, 2010; Manning, 2007; iNaturalist; http://redlist.sanbi.org).