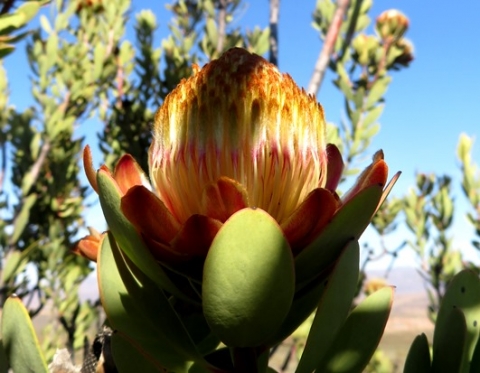 The Protea glabra flowerhead has the chestnut brown perianth tips that gives this Protea its common name of chestnut sugarbush. Halfway down, the styles are starting to burst the perianth segment seams, bulging outwards. The outer perianths will release their styles first to present pollen at their tips, at greater height than these perianths are standing now.

There is an interesting pinkish red patch on the perianth segments in picture at the level where the involucral bract tips clasped them during the bud stage. The flowerhead shape shown in the photo resembles adolescent hairstyles favoured by some humans of either sex.

The dull, yellowish grey leaves around the flowerhead have rounded tips rather than pointed ones, the blackish leaf tips still present (Rourke, 1980; Manning, 2007; Coates Palgrave, 2002; iNaturalist).