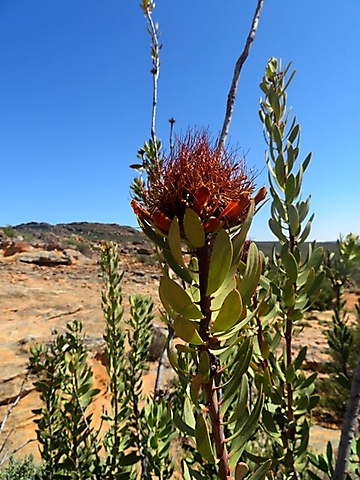 Protea is a genus of shrubs and small trees, erect or lying on the ground without forming additional roots; some species are tufted or lacking visible stems.

The Proteaceae family to which this genus belongs is very diverse, some genera like Protea bearing bisexual flowerheads, while others are dioecious. The family is also geographically diverse, occurring in Africa, South America, Australasia, Asia, Malaysia, Pacific islands and Madagascar. There are about 75 genera and 1350 species.

Leaves of Protea plants are alternate, ovate to needle-like, sometimes hairy, often thick and leathery with entire margins. Only one species, Protea cynaroides, has leaves with petioles, all the others bear sessile leaves.

The capitula or flowerheads usually grow solitary at stem-tips, although some have clustered heads from leaf axils. Each head is subtended by an involucre comprising several rows of bracts, sometimes scale-like in the outer rows at the base and progressively larger to the inside, variously coloured and sometimes hairy or thickly bearded at the tips.

The involucre is often the recognised, showy, even spectacular floral part to human admirers, the numerous tiny florets that reproduce the species often overlooked. The usually wide receptacle at the base of the involucre may be flat, concave or convex.

The tubular Protea florets in the head are bisexual and irregular in shape, as the inner three perianth segments are fused, forming a sheath, often ending in one or more awns. The outer segment is separate from this sheath, allowing the elongating style midsection to escape from the perianth as floret opening starts. At this stage the perianth still holds on to the style tip that ends in the pollen presenter onto which the ripe pollen will be smeared from the anthers before the perianth falls away, collapsing below once its function is fulfilled.

The stigma groove down which pollen will access the ovule, is at the top of the pollen presenter. It is initially closed and unresponsive while the ripe pollen of its own floret is distributed elsewhere first. After that the stigma becomes receptive to pollen from other florets through the intervention of insects, birds or rodents seeking the food they are accustomed to find in the flowerhead.

The four anthers of each floret grow from the inner surfaces of the perianth limbs (midsections), initially retained inside the perianth tip for the pollen to ripen before being released onto the pollen presenter.

The ovary, positioned at the base of the slender, persistent style, contains only one ovule. It is obconic, meaning it has an inverted cone-shape with its tip below, or at the point of attachment.

Long, straight hairs called trichomes grow from the ovary inside the base of the perianth tube. These trichomes may be rust-coloured brown, black or white. The trichomes play an important part in “planting” or moving the seeds into the ground, due to their ability of changing their orientation, by opening when it is hot and closing when cold.

The fruit is a woody nutlet or obconic achene, a small, dry, one-seeded fruit that does not open when its seed is ripe.

There are 112 species of Protea, 83 of them occurring in South Africa, mostly in the Western Cape. Proteas are widely recognised, popular and grown in South Africa. Not all species are easy to grow and many don’t fare well beyond their natural climatic regions and soil types. Proteas are said to be less common than they once were, due to human activities, particularly fire.

Still, they are widely marketed, exported and grown elsewhere in the world, where some South African Protea sports teams are as well known as the Springboks.