Home » GENERA P » Protea » Protea cynaroides
Back to Category Overview
Total images in all categories: 11,506
Total number of hits on all images: 6,514,071 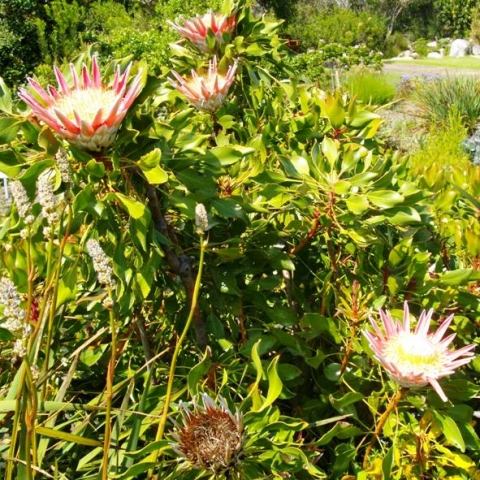 Protea cynaroides traditionally enjoys a position of honour among the proteas of South Africa. As the national flower it is cherished, also as the emblem of local sports teams.

The spectacular big flowerheads are recognized widely, convincing gardeners to grow the plant, maintaining its position as a prestigious garden subject. The king protea is grown and sold as a cut flower and nursery plant today in many countries.

Flower colour varies: the pale pink variety is common and well liked, while deep red and cream coloured flowering forms also exist. The shrub is relatively small for such a big flower. One well-growing bush may produce a large number of flowerheads in a season. The large flowerhead consists of many individual flower tubes or perianths bunched together within the cup of involucral bracts. One flower that was checked has been reported to yield 400 viable seeds. The season may last all year.

This Protea has an exceptionally wide distribution ranging from the Cederberg in the west along a broad coastal strip to Grahamstown in the east. The habitat is coastal and mountainous fynbos in medium to high rainfall regions at all elevations found here. The species is not considered to be threatened in its habitat early in the twenty first century (Eliovson, 1973; www.redlist.sanbi.org).