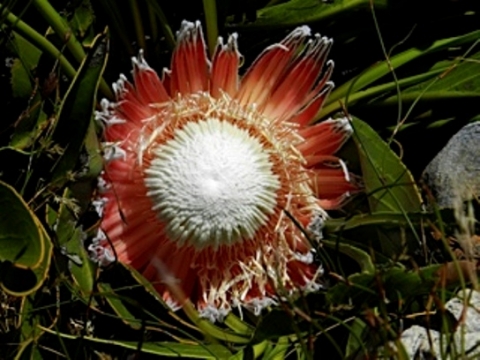 This maturing flowerhead of Protea cryophila has some open perianths. Each a complete little flower in itself, the erect styles and haphazardly positioned perianth segments of open flower spreading around the remaining compact cluster of buds still to open. Protea flowerheads in general appear more attractive when the flowers are still in bud, unopened in this coherent cluster.

When a perianth opens, the almost straight style escapes from the cover provided by the four perianth sections of each little bisexual Protea flower. As the style slips out of the grip of the splitting perianth bud, the pollen from the anthers at the tips of the perianth segments is smeared onto the escaping, sticky style tip.

The style, the female floral component is initially the pollen presenter, starting her duties by serving food to pollinators before she procreates. The food is nectar, hidden lower down in the flower. The insect or bird can only reach the food by touching the sticky pollen, becoming smeared with it. Still hungry, it unwittingly carries pollen as cargo to the next flower where more pollen and nectar are uploaded, some possibly downloaded in the right spot for the purpose of the plant.

This secondary feminine function of acting as pollen presenter, ensures that the male contribution is distributed to other flowers, if nothing untoward befalls the departing pollinator.  Pollinators, be they insects, birds or whatever else, thus have implicit, mutually beneficial arrangements with a plant species; with one, a few or many.

After acting as pollen presenter, the style tip reverts to its main role as stigma, designed to receive new pollen from other flowers, brought along by more visiting nectar seekers, still doing the rounds. This delay in the ripening of the stigma, turning it from a distribution platform to a receiving one and preventing self-pollination, is a common feature of flowers in the Proteaceae family. The vitally important pollinators are blissfully unaware of their function as they feast on the nectar, a byproduct only indirectly part of the procreation equipment as trading currency.

Marketing via colour to attract pollinators to P. cryophila  is enhanced by scent, as happens in the case of many other species, including humans. A yeasty odour is emitted by the open flowerhead, established by lengthy evolutionary processes to secure service providers.

The open season of long awaited pollination performances by a P. cryophila flowerhead lasts for only a few days. After the last performance, the curtain closes in the form of the coat of bracts converging again, closing in upon its treasure of fertilised flowers. Each modest contribution to the promise of species survival is kept safe on the plant while the seeds develop for dispersal inside.

All these reproduction related arrangements and the related feeding of transportation agents are driven by survival, established evolutionary through slow trial and error. Pollinators are not hairy or feathery for nothing, pollen does not tend to stick to things for no reason. All errors or failures end in death, all successes stand a chance of reward in offspring, the only and standard compromise made by death in its cleaning service after life.

While P. cryophila seeds readily germinate in cultivation, no flowering plants are known to have been produced to date. The enigma of growing these plants is also unlikely to be resolved soon, as seed collection from plants in the Cederberg has become prohibited, the species being listed as near threatened (Rourke, 1980; Eliovson, 1973; iSpot; www.redlist.sanbi.org).