Home » GENERA P » Protea » Protea cryophila as the budding flowerhead opens
Back to Category Overview
Total images in all categories: 11,632
Total number of hits on all images: 6,749,083 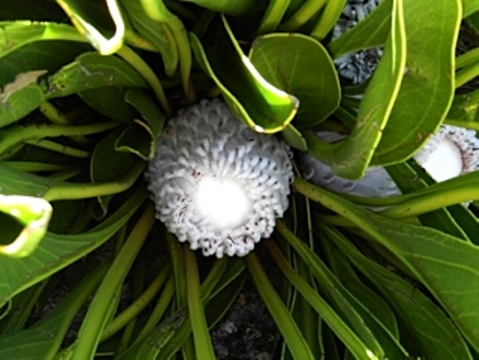 Protea cryophila, the snowball sugarbush, grows one strong main stem that is mainly hidden underground. Many side-branches radiate out from the main stump of a mature specimen, interlocking densely around it to form a spreading shrub of more than 2,5 m in diameter. Above-ground branches may reach heights of 50 cm, although leaves and flowerheads may be produced at ground level, common among the Protea species with underground stems.

Veld fires do not easily kill plants with so much stem protected underground, but the larger specimens, thought to be between fifty and seventy years of age, are too few these days.

The distribution of P. cryophila is limited to higher elevations in the Cederberg Mountains. From Sneeuwkop southwards for about 25 km and around the Sneeuwberg in the south-west, the plant grows on several of the higher peaks and down to altitudes as low as 1000 m.

This rocky, sandstone habitat is often snow-covered in winter as some of the mountain names suggest, the snowball sugarbush being covered under snow for weeks on end. Cryophila means lover of the cold.

Young flowerheads start arriving from midsummer, peaking at the end of summer, but new blooms continue to open until early autumn. The buds match the snowy appearance. The involucral bracts are pale grey in the photo, while the massed flower tips peeping out at the centre of the flowerhead are very white.