Home » GENERA P » Protea » Protea coronata in a dense stand near Greyton
Back to Category Overview
Total images in all categories: 11,632
Total number of hits on all images: 6,749,867

Protea coronata in a dense stand near Greyton 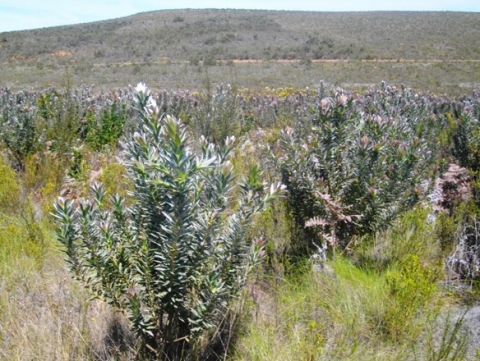 Protea coronata is not rare. In fact, it is likely to occupy available fallow land in the weedy sense within its habitat. This habitat ranges with interruptions from several Western Cape mountains, starting in the west with Table Mountain, the Kogelberg and Du Toit’s Kloof, the Langeberg range, the Outeniqua Mountains and some parts of the Tsitsikamma. Although the plants are susceptible to destruction by fire, they both reseed and resprout, contributing to their survival via two complementing processes, although this feature is not supported by all literature sources.

P. coronata is not seen in gardens often enough. It adapts well to a variety of soil types within a moderately acidic range and reasonably well-drained, although the plant is also found in heavy clay soils lacking ideal drainage. It will perform in summer rainfall areas with some watering support in winter. As a popular cut flower, P. coronata brings a good option to the florist. A shrub should last around ten years in the garden and can reach 2 m within four years in favourable conditions; so give it some space!

Less successful in the export market than some other proteas. This may be due to high occupancy from insects inside the flowerheads. Stowaways are not welcomed by customs officials at border controls anywhere!

Historically this Protea was one of the most common species on the slopes of Table Mountain in the early days of the Cape Colony, where it was not highly regarded by the populace, used as firewood (www.plantzafrica.com; http://protea.worldonline.co.za; Rourke, 1980).