Home » GENERA P » Protea » Protea cordata flowerheads at ground level
Back to Category Overview
Total images in all categories: 11,411
Total number of hits on all images: 6,181,732 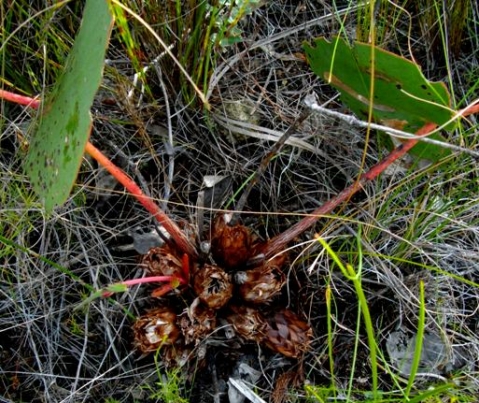 A cluster of brown flowerheads are produced by Protea cordata at the base of its stems. A flowerhead becomes about 5 cm in diameter, growing from axils and have peduncles.

There are four or five rows of papery involucral bracts on the flowerhead, overlapping loosely. When the bracts part in the centre, the open flowerhead displays a multitude of tiny creamy florets with red tips. Flowering happens in midwinter.

The distribution of P. cordata in the southwest of the Western Cape is from around Du Toit’s Kloof to the mountains around Bredasdorp. The plant grows from sea level to 1200 m in all habitats found in the region. The species is not considered to be threatened in its habitat early in the twenty first century (Rourke, 1980; Bean and Johns, 2005; www.redlist.sanbi.org).