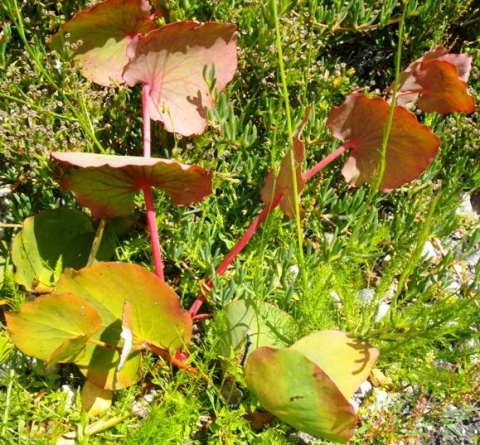 Protea cordata is one of the rodent pollinated proteas. While many Proteaceae species receive pollination from visiting birds or insects (and some leucadendrons are wind pollinated), there is a group of species that depends on rodents for this service. Several kinds of mice, rats, gerbils and shrews living in the fynbos participate in what is known as therophilous pollination.

Proteas adapted to serve rodent pollinators have their flowers positioned low down, close to the ground and inside the bush where birds and insects will not notice them easily. The involucral bracts of the flowers are dark and unremarkable on the outside, again not attracting birds and insects. These bracts are pale on the inside, assisting the targeted nocturnal visitors to find the nectar, and of course, the pollen.

The distance between the pollen presenters at the style tips on top of the flowerhead and the nectar at the bottom of the individual flower tube is about the same as the length of the rodent’s snout; so they can reach. The rich sucrose reward received by the animal in the flowering season (from winter to spring, depending on the species), comes at a very opportune time when the rodents breed (protea.worldonline.co.za).

Plants and animals have evolved in an integrated ecological system, survival secured by species interdependence. The brutal logic of survival for such functional alliance partners often appears to humans as a cerebral rather than a statistical process. The only planning lies in the outcomes of the diverse struggles for life.