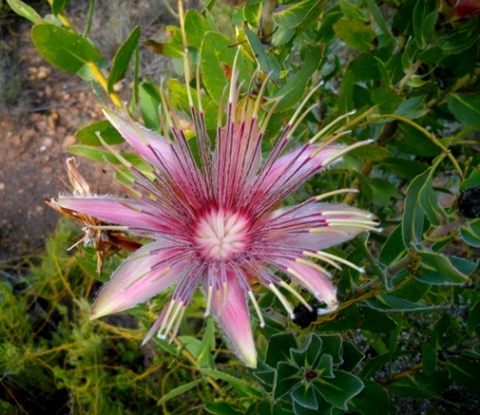 The early stage of the open flowerhead of Protea aurea subsp. aurea shows the perianths spreading. That leaves an open central space exposing the white basal sections of the styles down to where the ovaries are securely attached to the convex receptacle.

When the perianth sections of the individual floret are forced to liberate their style by the rapid elongation of the latter, they collapse in a jumble over the ovary, providing cover for its important future tasks of fruit and seed formation. The style is about 10 cm long, the pollen presenter 17 mm and the ovary 3 mm.

This unusually shaped Protea flowerhead has intrigued horticulturists for centuries. Rourke outlines the resulting spread of P. aurea subsp. aurea in the gardening world to places like Hawaii and the Scilly Islands (Rourke, 1980).