Home » GENERA P » Protea » Protea aurea subsp. aurea, the long and the white and the old
Back to Category Overview
Total images in all categories: 11,411
Total number of hits on all images: 6,181,822

Protea aurea subsp. aurea, the long and the white and the old 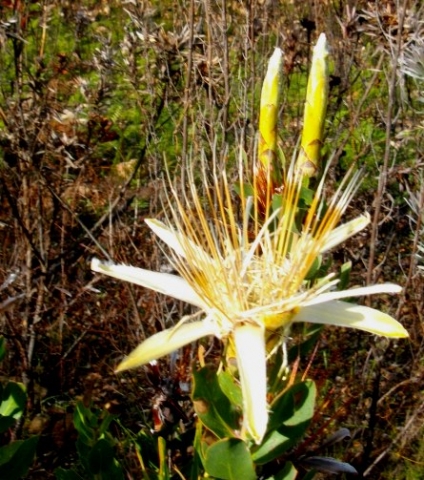 The open flowerhead has its longest, inner floral bracts spreading widely. They are oblong in shape with pointed tips. Their surfaces are slightly concave near the tips, the margins hairy. The pale orange styles are straight and needle-like, spreading in an inverted cone-shape above the receptacle. Their pollen presenter tips are white and longish, by now probably reverted to their second, purely feminine task of being stigmas that accept pollen brought from other florets. The style has an abrupt bend at its tip where it connects with the pollen presenter. An unkempt tangle of perianth remains rests around the base of the styles.

Two white and lemon coloured cylindrical buds wait like candles in the background to perform the same spectacle that the open flowerhead is concluding (Rourke, 1980).