Home » GENERA P » Protea » Protea aurea subsp. aurea having escaped a big fire at Greyton
Back to Category Overview
Total images in all categories: 12,091
Total number of hits on all images: 7,393,251 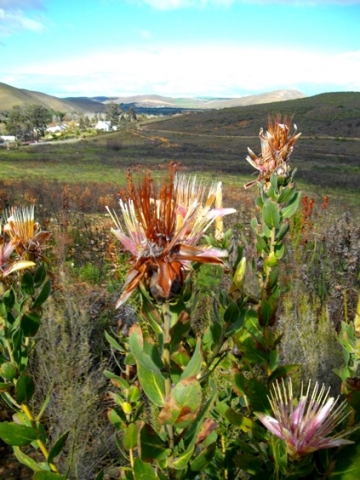 This pale pink flowering Protea aurea subsp. aurea bush has escaped the fire that devastated much fynbos near Greyton. The photo was taken in June, but this Protea may bloom in all seasons.

The sense of loss brought by bare blackness in the fynbos is soon replaced by excitement about the return of flowers not seen for some years. Those responding vigorously after fires have been waiting for just this occasion, temporarily to take the place vacated by the big plants (like P. aurea subsp. aurea).

Fynbos plants being cramped for space, respond by the small ones and resprouters eagerly usurping all newly available places in the sun when the big, dominant species suddenly depart. The cycle of sporadic fires acts as marshall of fairness among the plant species... partly! Each still has to fend for itself in the survival stakes.

Life's fierce survival competition is in the face of all species, barring a few. Humanity's collective measures embedded in civilisation have softened the blow for people. A small percentage of plant species share the protection, serving as human food and for other purposes in monoculture crops. Select animal species benefit as well, serving either as food themselves or as pets.

Herbicides, fungicides, insecticides and many more poisons, as well as genetic manipulation serve to maintain the myriad of human requirements. This gradually warps nature in scientifically supported ways that defy prediction of long term consequences.

The short term focus predominates and fits budgets and impatience better. This keeps the future interesting and dangerous, as nature has always maintained it without human help in the past. The more things change, the more they stay the same.

Time-sharing of space and facilities is an effectively arrangement in the fynbos, the species too many for simultaneous flourishing of them all on the available land.