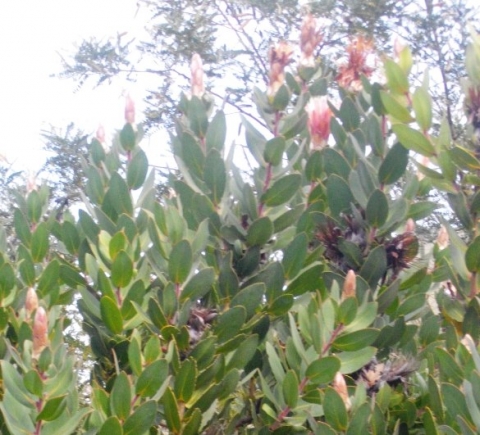 Protea aurea subsp. aurea, commonly the long-bud protea, grows into a large shrub, its tall woody branches, seasonally topped with flowers at a couple of metres high, occasionally 5 m high (SA Tree List No. 90.3). The single stem may have a fluted base.

The leaves are oblong to oval and hairless. The leaf-tips on different forms of the plant may be rounded or angular, obtuse or acute. The single-stemmed plant dies in veld fires, its seed surviving, making it one of the reseeders, not a resprouter species.

P. aurea subsp. aurea usually flowers plentifully in a season when not too many other proteas blooming, from before midsummer until early winter. This feature, the attractive foliage and easy cultivation guarantee a place for P. aurea subsp. aurea in many larger gardens of the Western Cape and other areas with conducive climates. Places with conducive climates have also been found for it in Australia, New Zealand, California and even Hawaii, where the plants are seen these days.

The natural distribution is only along the mountain ranges in the south of the Western Cape, from Riviersonderend along the Langeberg Mountains to the Outeniqua Mountains near George.

The habitat is south-facing slopes in fynbos, mostly in cool, moist conditions. The subspecies is not considered to be threatened in its habitat early in the twenty first century (Manning, 2009; Rourke, 1980; Eliovson, 1973; http://redlist.sanbi.org).