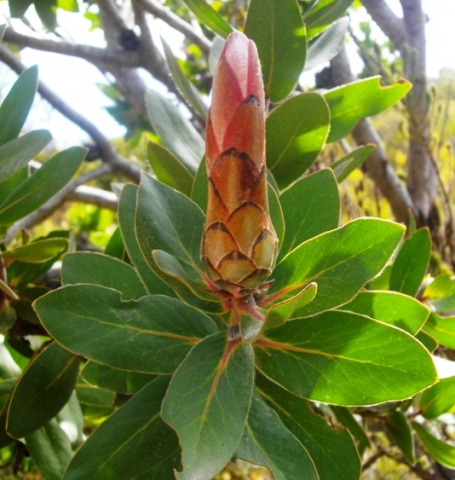 Protea aurea subsp. aurea is commonly found on south facing slopes of the Langeberg and Outeniqua Mountains in the southern Cape. Some few north facing slopes have stands of these proteas as well, but in moist and sheltered spots. This photo was taken at the Salmondsdam Reserve of Cape Nature south of the Akkedisberg Pass. It must have been this bud-shape that brought the plant its earlier name of P. longiflora.

While P. aurea grows widespread and is not considered to be threatened in its habitat early in the twenty first century, there is one regional variation of the species that has become near threatened. It is called P. aurea subsp. potbergensis, a white flowering form that is restricted to the Potberg area at the coast near Cape Infanta and the Breede River mouth (Manning, 2007; Rourke, 1980; http://protea.worldonline.co.za).