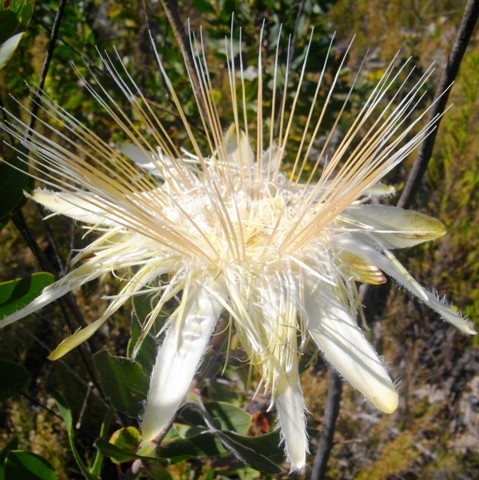 The flower of Protea aurea subsp. aurea starts off as a long cylindrical bud, broad at the base and pointed at the top, like a rocket. It opens to display the inner flower parts initially neatly pressed against the creamy white to light greenish or pink flower (involucral) bracts. A cone-shaped opening is thus created in the centre, resembling a shuttlecock from which the styles protrude in a neat array. Towards the end of flowering the head morphs into random untidiness of spent perianths below the straight, spreading styles.

Flowering occurs all year round, more in the first half of the calendar year. Pollination is done by nectar consuming birds. Seed dispersal by the wind happens after long storage in the seed-head on the plant.

Unlike the leucadendrons the proteas have both sexes on the same plant and also in the same flower.

This photo was taken near Greyton at the western end of the plant's distribution (Manning, 2007; Rourke, 1980; http://protea.worldonline.co.za).