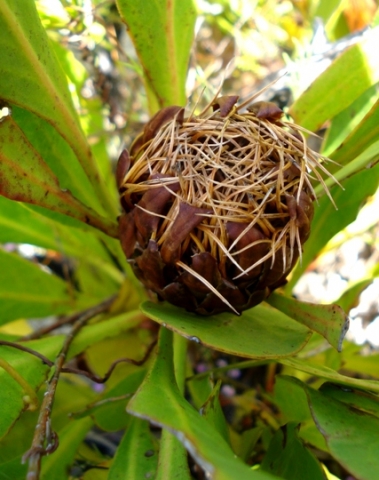 This spent flowerhead of Protea acaulos has nearly returned to the ovoid shape it had as a bud, reverting from the cup-shape of the open head. A tangle of used-up styles protrudes above the five or six rows of involucral bracts forming the enclosure that housed the dense bunch of individual florets.

These brown bracts were pale green in their prime with reddish, rounded upper margins, the flowerheads varying in colour between yellow and pink. An open flowerhead measures from 3 cm to 6 cm across. The styles are curved to sickle-shaped on a newly opened flowerhead and up to 3,5 cm long. Flowering happens in winter and spring.

Pollination of these low-growing flowerheads is done by rodents, access convenient for service providers that don’t fly. At peak flowering time the bracts may be splayed widely for a period, removing possible barriers from the way of hungry mice attracted by the yeasty flower smell.

This plant was seen in the Kogelberg in November when last blooms of the season might have been present, but not here (Rourke, 1980; Manning, 2007; Privett and Lutzeyer, 2010; Wikiwand).