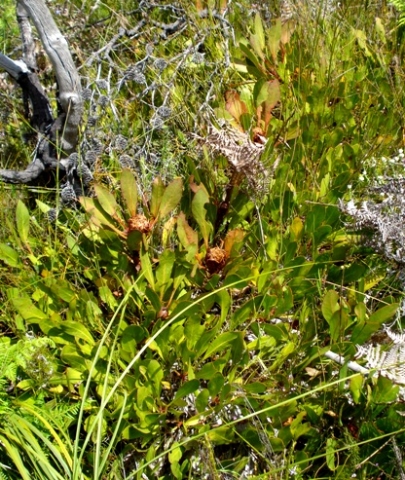 Protea acaulos, commonly called the ground protea and in Afrikaans the aardroos (earth rose), is one of the dwarf proteas. It grows multiple short, trailing stems producing a leafy mat of about 30 cm tall from a large, branched system underground. The specific name acaulos, meaning stemless, says it has no stems as the appearance of the plant often suggests. The hairless stems such as seen in the photo emerge from the ground close to each other, spreading to a clump of about 1 m in diameter.

Rhizomatous proteas, this one too, are fire resistant. They sprout from the underground, fire-protected parts, once weather conditions deliver a sufficient prompt.

The main underground stem tends to distend into a lignotuber, a woody swelling of the root crown that enhances the capacity of the plant for surviving trauma such as fire. This root crown contains not only buds for sprouting new stems, but stores starch that will support growth before there are leaves to photosynthesise.

Not recognised as one of the glamorous Protea species, this plant was still noted during the early explorations by botanically inclined Europeans, first recorded to bloom in England by 1805.

The species distribution is confined to a part of the Western Cape: from the Cape Peninsula to Bredasdorp, the Riviersonderend Mountains and northwards to the Cederberg. The habitat is sandy flats as well as lower sandstone and granite slopes from sea level to 1500 m. In the drier parts of the habitat the plant only tends to grow at higher elevations. It may be cooler here and mist may deliver moisture (Rourke, 1980; Manning, 2007; Privett and Lutzeyer, 2010; Wikiwand).