Home » GENERA P » Pelargonium » Pelargonium bowkeri
Back to Category Overview
Total images in all categories: 12,081
Total number of hits on all images: 7,379,176 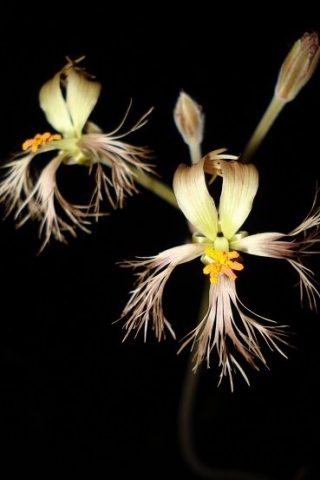 Pelargonium bowkeri is a tuberous plant, one of the caudiciform Pelargonium species that stores water in a thick rootstock. This underground rootstock is usually the only perennial plant part; the above-ground stems and leaves deciduous, dying off in winter and resprouting in spring.

The upper, mature leaves are three times compound or tripinnate in finely feathery green, conspicuous when young. First lower leaves upon sprouting are closer to a simple leaf form with some marginal lobes and teeth.

The flowers are also of a feathery, shredded appearance, not often seen in Pelargonium. The petals are botanically described as fimbriate, i.e. having a fringe of hair-like or finger-like projections. Especially the lower three petals branch quickly into narrow strips. They lack most of the initial unbroken or intact petal parts, the lower oblong blade near the base of each upper petal. This pair of upper petals recurve, displaying their frayed tips towards the back of the flower.

The flower colour varies, sometimes white, pale pink, purplish or creamy. Here they appear yellowish in a night photo. The upper petal parts not in tatters differ in colour from the rest of the corolla.

Five narrowly elliptic sepals form the base of each flower. The flower body is longer than the pedicel on which it stands. There are seven fertile anthers on filaments of varying length in the flower centre.

P. bowkeri grows in parts of the eastern summer rainfall region of South Africa, particularly the Little Karoo, the Transkei and the Drakensberg in KwaZulu-Natal and Mpumalanga.

The habitat is mostly rocky grassland. The species is not considered to be threatened in its habitat early in the twenty first century (www2.arnes.si; www.pacificbulbsociety.org; http://redlist.sanbi.org).