Home » PARKS AND GARDENS » Walter Sisulu NBG » Drimia altissima, the leafless season
Back to Category Overview
Total images in all categories: 9,754
Total number of hits on all images: 4,379,174 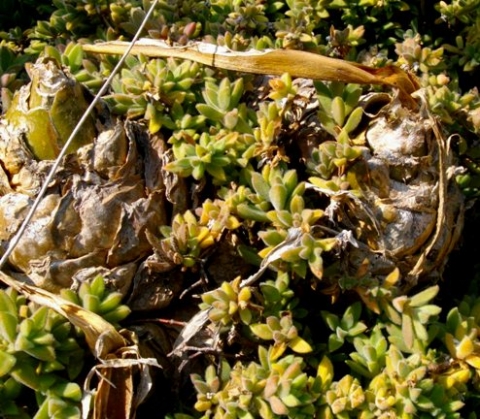 Previous
Image 9 of 26
Next

Drimia altissima bulbs look like this in winter when their deciduous leaves have completed their annual task and are discarded. Dry leaf remains are still to be seen in the picture. The large bulb is only partly underground, the exposed scale parts fleshy and green in colour. The mesemb growing around the bulbs here in the Walter Sisulu National Botanical Garden is Delosperma calycinum.

At bloomtime in spring D. altissima grows an erect scape, long and snake-like, emerging with the seasonal rising temperature, but usually before the summer rain. The cylindrical raceme carries many small white flowers. Their pedicels are longer than the perianths. The tepals have longitudinal green lines, more noticed on the outer surfaces and the buds before the flowers open. Six thick white filaments spread from around the ovary above the tepals, topped by pale yellow anthers.

The plant used to be called Urginea epigea. The Urginea genus seems to have as a whole been sunk into Drimia. It now forms part of the Hyacinthaceae family after some nomadic taxonomical times; or more might still come (Manning, 2009; iSpot; www.lifestyleseeds.co.za; www.pacificbulbsociety.org).