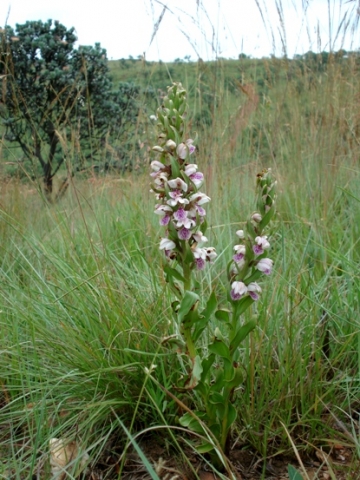 The Highveld where the plants grow naturally has been transformed comprehensively by a large human population, to an extent that it would today be unrecognisable to anyone who had seen it two centuries ago (barring those with capability in geographical forensics).

The habitat, the little that is left of it, is open and wooded grassland in sandy, gravelly soils overlying dolomite, sometimes quartzite. The plant population is expected to decrease by 80% over the next 60 years.

There are, however, plans afoot involving WOSA, a sub-committee of the Orchid Society of SA and the Walter Sisulu National Botanical Garden to deal with countermeasures regarding this negative expectation.

The other two subspecies of B. conica occur in tropical Africa beyond the South African border (www.redlist.sanbi.org).