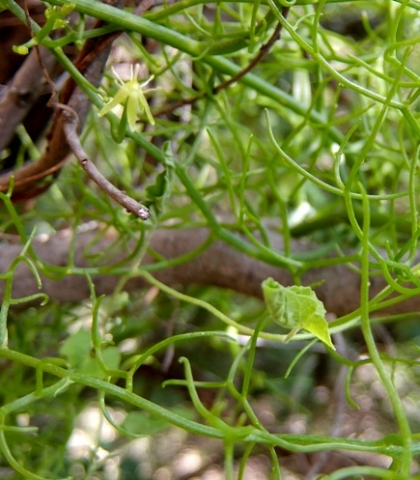 Bowiea volubilis subsp. volubilis growing under the trees on a slope next to a path of the Walter Sisulu requires the observer to make a stop: not a plant seen every day. So many tiny flowers, such jumbled thin stems and the green bulb top on the ground all remain in the memory, even if the long scientific name doesn’t.

There was a Carthaginian, later a Roman city called Volubilis in what is today Morocco, not far from Fez. You could visit the excavated ruins or just see the plant in the Botanical Garden in Johannesburg.

Volubilis has meanings including fluency (also in speech), whirling motion, fickleness and inconstancy; concepts suggested by the vigorous stem growth of this plant, culminating in masses of tousled branches. Maybe the Romans found the citizens of Volubilis gushing or loquacious; or maybe all sorts of surprises lay in wait for visitors behind the city walls.

In French, another coloniser language heard for a time around the now dressed stone ruins of Volubilis, the word denotes vine-like plants, such as bindweed, Convolvulus or Ipomoea; all of them (fickle?) twiners (Pooley, 1998; Wikipedia).