Home » PARKS AND GARDENS » Quiver Tree Forest » Defiance
Back to Category Overview
Total images in all categories: 12,086
Total number of hits on all images: 7,387,271 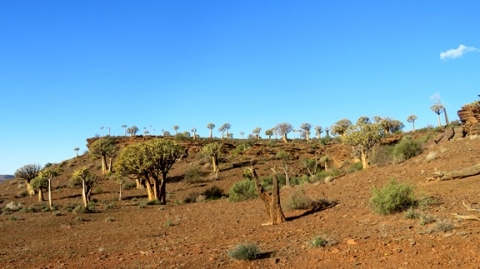 Previous
Image 7 of 50
Next

The small white cloud repeats the message of the bare ground around the dead quiver tree stump in the foreground. The very young of its kind is about absent from this part of the forest as conditions these days challenge in new ways.

Earth life everywhere and always goes through cycles of abundance and hardship that impose transformation upon the mix of survivors. All of it is caused by physical laws that are stable and relentless.

Wishful thinking too is governed by those laws. What is wished for has to be supported by effective adaptation and in the case of people, one currently dominant species, by clever contrivances.

All life affects some other lives in the earth's living community. Living entities are both dependent upon and threatened by a myriad of competitive skirmishes happening continually in the earth’s biosphere layer. Like a predator causing its main food supply to go extinct when the consumption becomes too easy, the victim species replenishment too hard. Players partner and oppose as long as there is any life, mostly without awareness.

How much does humanity contribute to the extinction of species around itself? Even of those it does not eat? The argument for no impact by the brainy boss of much on earth is easily abandoned as ridiculous. The opposite, that people cause all extinctions is equally ridiculous. Somewhere between, the sad evidence of our concrete and cars handiwork is undeniable. Climate change is real, visible in many signals.

The outlook for the next era is bleak for many kinds of neighbouring species, maybe even for us. Who knows what lies beyond and what we’re capable of fixing? Overall adjustments by nature are continuous; that relentless fighter for life itself, favouring only the resilient.