Home » PARKS AND GARDENS » Quiver Tree Forest » A forest of quiver trees
Back to Category Overview
Total images in all categories: 12,086
Total number of hits on all images: 7,387,313

A forest of quiver trees 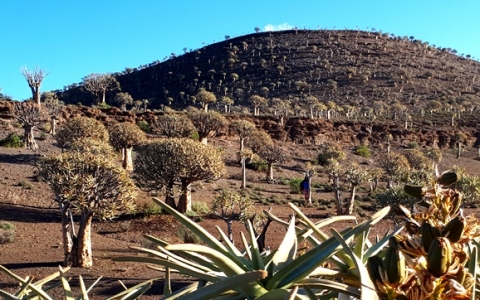 Travelling on the road between Nieuwoudtville and Loeriesfontein one comes upon this extraordinary sight. A large, though thinly spread forest of Aloidendron dichotomum trees covers the slopes to the south of the road.

The forest grows on the verge of a large protected area called the Gannabos Protected Area, land that apart from the forest seems endless and unchanging. (Dare one say boring? Not in the spring flowering season!) Out of a dreary sameness of the veld, these trees appear suddenly, an imposing presence.

The scant, ground-level scrub vegetation is mostly quite short and thirst-fighting. It continues among the trees as if nothing has changed from the many uneventful kilometres of rolling hills and bare plains of before.

Peaceful thought patterns prevailing during the so far uneventful journey are disrupted as mild drifting in a low gear of consciousness abruptly ends.

Then unexpectedly, towering over the barren slopes in stark contrast, the large number of scattered trees claims full attention. This is so spectacular! Thousands of A. dichotomum trees stand spaced in the landscape from here to far, splendid and photogenic like China’s Terracotta Army.

For kilometres over the horizon in several directions, the quiver trees spread over the slopes, gulleys and brows in one magnificent presence.

How long have they been here? Maybe from before China’s first emperor, Qin Shi Huang, had his army of life-sized soldier statues made more than two thousand years ago. The city-sized, clay figure mausoleum of his soldiers still stands guard over him in the afterlife, or just stands.

The live Quiver Tree Forest in which juices flow between roots and succulent leaves also just stands, part of a wonderful world. It will hopefully remain for posterity as well (Wikipedia).