Home » PARKS AND GARDENS » Pretoria NBG » Pretoria National Botanical Garden
Back to Category Overview
Total images in all categories: 12,058
Total number of hits on all images: 7,353,535 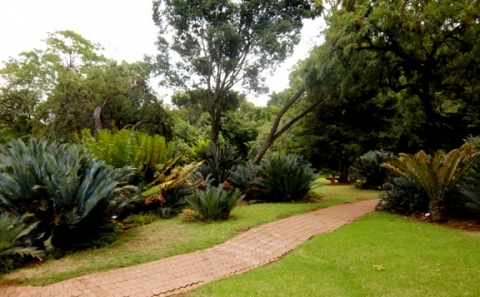 Presenting plants of its region, South Africa and some from further afield, this Garden is frequented by thousands to learn, to enjoy and to socialise; or to embrace solitude. This is a site of lifelong memories made for many lives, by locals and tourists, many from abroad.

There is a fifty-hectare area of indigenous garden representing mainly the bushveld, grassland, forest and fynbos biomes. Situated in the suburb of Brummeria to the east of the city centre and established in 1946, it started off as the Transvaal National Botanic Gardens. That provincial name gone and more National Botanical Gardens having appeared north of the Vaal River (in Johannesburg and Nelspruit, so far), the name had to be changed. Pretoria may yet become Tshwane (a little more seriously, albeit formally already), so more signposts may be changed later.

As the Pretoria National Botanical Garden the gates opened to the public in 1984.