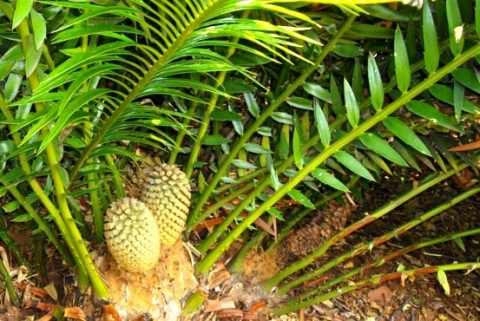 The cones of Encephalartos senticosus grow in groups at the stem top, the genders represented by separate plants. The plant in picture, being a female, shows two narrowly ovoid greenish cones with buff scale tips, raised in pyramidal structure. They should turn yellow in the months to come. Male cones would be narrower, growing in groups of three or four.

Cones usually appear early summer; this plant was seen fruiting in January in the Pretoria National Botanical Garden. Should there be a viable male cone near enough, producing pollen by about the coming autumn, fertilisation might occur. Bright red seeds, between 280 and 590 in number, may then be released when these ripe cones disintegrate around next spring (Coates Palgrave, 2002; www.plantzafrica.com).