Home » PARKS AND GARDENS » Pretoria NBG » Combretum kraussii last flowers
Back to Category Overview
Total images in all categories: 12,058
Total number of hits on all images: 7,353,523 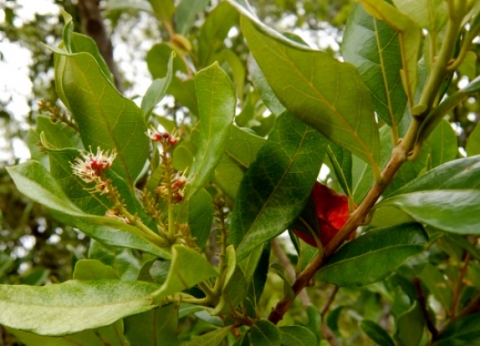 At the end of the flowering phase only few Combretum kraussii florets still remain on the spikes in picture. Flowering was late on this tree growing in the Pretoria National Botanical Garden, far to the west of the tree’s natural distribution in the Lowveld parts of Mpumalanga and Limpopo, also southwards on the east coast of the Eastern Cape and KwaZulu-Natal.

Maybe it lacked the enabling higher temperatures during spring? That is when the axillary heads become elongated, bearing their creamy white flowers, all going well in habitat. Up to 50 tiny flowers may make up one spike.

Theeaf margins are rolled under in the photo. Distinct pointed tips occur on the leaves. Ascending lateral veins are visible on both leaf surfaces, prominent on the lower one. The net-veining is clearer to see on the dark upper surfaces (Coates Palgrave, 2002; Van Wyk and Van Wyk, 1997).