Home » PARKS AND GARDENS » Pretoria NBG » Ants in the Pretoria National Botanical Garden
Back to Category Overview
Total images in all categories: 12,058
Total number of hits on all images: 7,353,522 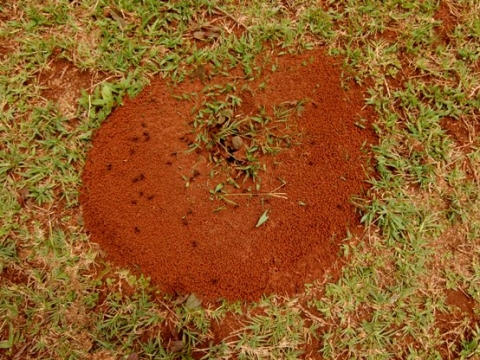 Ants are important in the world of plants. They eat plants and seeds, as well as decaying plant, fungus and animal material. They consume nectar and thereby pollinate flowers; they eat elaiosomes and thereby disperse seeds. They have been singled out in the Bible for the virtue of being hard-working.

Ants have been active on earth for longer than 100 million years. There are at least 12 000 ant species on earth. And there may be more as only a part of the insect world has yet been studied and described. Having been here for so long, the ants are biologically very diverse.

All ant species are social, i.e. there are no species of single living ants, as found for instance among bees. Ants are believed to have evolved from ancient wasps that nested in the ground. Within an ant species several castes (of sterile female ants) of different sizes and differently endowed, perform specialised functions in the complex systems characterising their colonies.

In 1948 Hutchinson and Melville wrote in The Story of Plants about humanity’s increasing control over its physical environment, foreseeing social and even physical evolution of people into dedicated working and controlling castes, resembling the organisation of ant colonies.

Whether human society will be more democratic or more totalitarian, governed in accordance with better or worse values, long term transformation continues steadily in the total biosphere of land, water and air that surrounds the earth. Human impact on earth is increasing for now, but is so far very short-lived, compared to that of the ants. And enormous insect generated effects (and benefits) still occur around us, including a large contribution from the ants.

All that lives on the earth collectively creates transient, multidimensional matrices or webs of successive ecologies. These ecologies or integrated living systems continually adapt interactively to something better for winners of the moment, worse for the losers; the eventual outcomes unknown for all.

Nature has no grand plan, only a complex process of continual becoming, in accordance with its constituent forces of the day. Evolution is an open-ended process, the species yet to come will also have their surprises (Holm, 2008; http://harvardforest.fas.harvard.edu).