Home » PARKS AND GARDENS » Mjejane Game Reserve » Combretum mossambicense far-reaching
Back to Category Overview
Total images in all categories: 12,086
Total number of hits on all images: 7,387,195 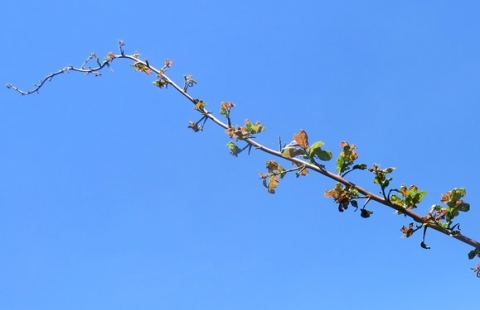 Rosy red colouring is not common on Combretum mossambicense leaves generally. They are mostly deep to dull green. But the robust new growth of long trailing or temporarily erect water-shoots may display shades of pink to rusty red on their lush new foliage.

The stem is straight where it is sturdy, succumbing to less resolute shapes near its tip, suggesting the climber attributes of this plant. The long thorny peg protrusions visible on the stem are persistent stalks of lost leaves, a feature of the knobbly climbing bushwillow.

The nodes between leaves are large. When the side-branches increase in weight, gravity will have its way with this ambitious youngster (Carr, 1988; Coates Palgrave, 2002; Schmidt, et al, 2002; Mannheimer and Curtis, (Eds.), 2009; iSpot; http://redlist.sanbi.org).