Home » PARKS AND GARDENS » Mjejane Game Reserve » African pied wagtail
Back to Category Overview
Total images in all categories: 12,086
Total number of hits on all images: 7,387,226 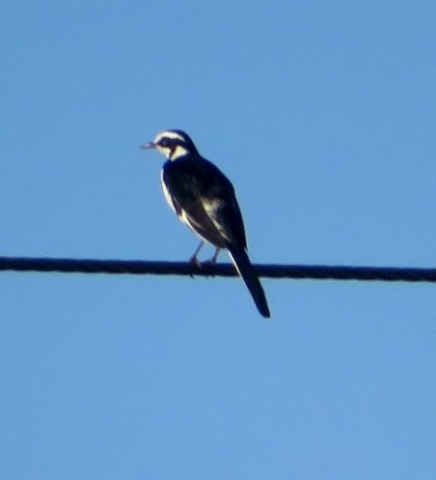 Previous
Image 4 of 75
Next

The African pied wagtail, known in Afrikaans as bontkwikkie and scientifically as Motacilla aguimp, is the largest of the southern African wagtails. It becomes about 20 cm long and weighs 27 grams.

Living in the eastern and northern parts of South Africa apart from widespread in tropical Africa, it frequents riverine habitats, marshland and moist or flooded grassland. People have added more suitable places for them to live or visit: Wherever watering occurs sufficiently as in parks, gardens and sewage ponds these birds may appear in search of mainly insects and grass seeds.

The pied wagtail lays three or four off-white eggs covered in vague brown and grey markings in a cup-shaped, grass-lined nest. The eggs hatch in 13 days unless the nest is parasitised by cuckoos. The young are sometimes eaten by Burchell’s coucal. Living with risk is for everybody (Maclean, 1993; Wikipedia).