Home » PARKS AND GARDENS » Kirstenbosch NBG » Boomslang, the other one!
Back to Category Overview
Total images in all categories: 12,086
Total number of hits on all images: 7,387,273

Boomslang, the other one! 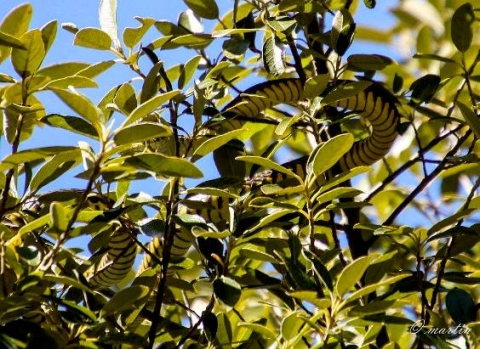 Previous
Image 6 of 33
Next

The Kirstenbosch Tree Canopy Walkway near the Arboretum also known as The Boomslang is quite different to the boomslang of this photo.

Seen at Fernkloof, Hermanus, this real snake reminds of the importance of vigilance in the veld. Fortunately, people spending time in nature often go with increased awareness, heightened by expectations of rewarding observations.

Such hikes are usually undertaken armed with cameras and cell phones, apart from water bottles and protective clothing. Those items are occasionally found in the bush from the attention lapses of earlier visitors, or missed before reaching home.

Two energetic thumbs on a cell phone with momentary disregard for bush surroundings may cause an unfortunate exchange with a real boomslang or unwelcome equivalent.

The boomslang, Dispholidus typus, is the only species of its genus. The average adult boomslang is 1 m to 1,6 m long, weighing about 300 grams. Its head is egg-shaped, the eyes large with round pupils. It has keen eyesight. The snake’s colour is variable, males pale green with black or blue scale edges, while adult females are green-brown or brown. There are three very large, grooved fangs positioned in the mouth below each eye.

The species is oviparous, the female laying up to 30 eggs, usually in a hollow tree trunk or rotting log. The eggs hatch in three months. Hatchlings are harmless, becoming venomous when about 45 cm long.

This reclusive snake is mostly arboreal, hiding and moving nimbly in trees where it will catch lizards, chameleons, frogs, small mammals and birds or eat their eggs. Every food item is swallowed whole.

During cool weather, a boomslang may hibernate for a period, sometimes curled up in a bird’s nest, like that of a weaverbird (Wikipedia).