Home » PARKS AND GARDENS » Harold Porter NBG » Lobelia pinifolia
Back to Category Overview
Total images in all categories: 12,058
Total number of hits on all images: 7,353,562 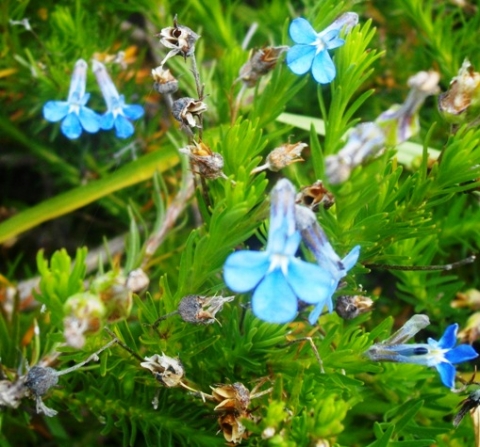 These Lobelia pinifolia flowers seen in the Harold Porter National Botanical Garden in September represent several stages of the flowering cycle. The distinctive Lobelia corolla lower lip formed by three of the petals is the hallmark of the genus. The stamens are attached to the petal bases, their anthers joined and bearded. Racemes of three to ten flowers grow from leaf axils as well as at branch tips.

Some fruit capsules have already formed on this plant (Manning, 2007; Bean and Johns, 2005; www.plantzafrica.com).