Home » PARKS AND GARDENS » Harold Porter NBG » Gleichenia polypodioides
Back to Category Overview
Total images in all categories: 12,058
Total number of hits on all images: 7,353,505 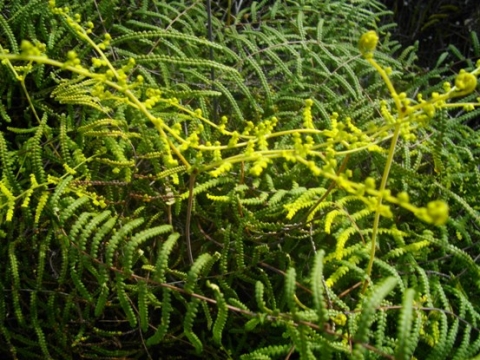 Previous
Image 2 of 14
Next

There is an appealing neatness about the regularity of the appearance of coral fern fronds. Gleichenia polypodioides, proper name of the coral fern, grows from a brown, slightly scaled rhizome. The widely spaced, hairless fronds grow on the many branched, dark coloured stems that crisscross each other, neighbouring plants and other supports. The result is the attractive green frond mass seen here.

The photo was taken in the Harold Porter National Botanical Garden where the plant was growing naturally next to one of the rivers that flow through the Garden.

The leaf stalks are rigid. Fronds are divided and redivided into similar lengths and regularly spaced sections. Sori are situated towards the base of each section on the leading edges. A sorus (plural sori) is a cluster of sporangia, the structures producing and containing spores in ferns and fungi. These sori are sunken into tiny depressed areas on lower surfaces of the fronds.

In more formal parlance: leptosporangiate ferns like Gleichenia have sessile sporangia that lack an indusium and dehisce by a transverse annulus. An indusium is an outgrowth of a fern frond that covers the sori. An annulus is a ring formed by two concentric circles, a fleshy plant part (Bean and Johns, 2005; Wikipedia).