Home » PARKS AND GARDENS » Addo Elephant National Park » Red hartebeest travelling by road in Addo
Back to Category Overview
Total images in all categories: 8,940
Total number of hits on all images: 3,961,063 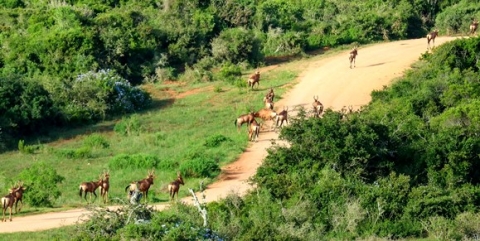 Red hartebeest move around in family herds of up to 20. The reddish-brown antelopes are taller in shoulders than hips, helping them to conserve energy when going on long runs of around 15 km, during which they can maintain speeds of 60 km per hour. Both genders have horns, those of the males a bit bigger.

They mainly eat grass, but will browse leaves, pods and fruits to a lesser extent. As diurnal animals they graze mainly early morning and late afternoon. Where water is available, they may drink about 11 litres every second day, but will eat tsammas (wild watermelons) or dig for roots as may be present when water is scarce.

The bulls mark their territories by dung middens and standing on high ground such as termite mounds, watching for predators and asserting their presence upon neighbouring bulls and itinerant cows. They also leave pheromones and other secretions on vegetation and soil from preorbital glands situated near the bases of their horns.

Females venture further than males, entering territories of different males as they choose. A single calf, slightly paler than the adults, is born after gestation of eight months. It will be suckled for eight months, but also eats grass from only two weeks old. A cow produces her first calf when 3 years old.

A hartebeest lives for 15 to 16 years if sufficiently vigilant and fortunate. Scientifically it is known as Alcelaphus buselaphus (Riëtte, 2016; Wikipedia).