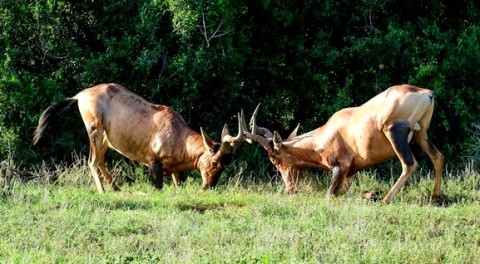 The need for dominance functions in species from insects to artists and politicians. In antelopes like the red hartebeest it serves to govern access to territory and females. Survival of the fittest is thus aligned with breeding by the strongest through manifestations of aggression.

The behaviour is elicited from males that have eaten, slept and mated sufficiently to attend to other matters. It starts suddenly when they notice other males of roughly similar strength that may be subjugated. The fight is a vigorous engagement of testing, sometimes interlocking horns in an upright position. Horn clashing may be heard from a few hundred metres away. These fights often happens in the mating season.

Robert Ardrey, playwright and science writer was one who generalised the mammalian capacity for aggression in The Territorial Imperative to humans but allowed for cultural adaptations in manifestation. Whether you kneel in front of an opponent to lock horns or defeat him in tennis, chess or debate, you draw from the same shared source of animal needs and attributes. These are adapted firstly according to species and secondly according to the tastes and conventions of your culture and era.

Sublimation brings behavioural decorum through camouflage, but will compassion and ethics ever cause sufficient separation from roots to stop the fighting? Religion certainly did not (Riëtte, 2016; Wikipedia).