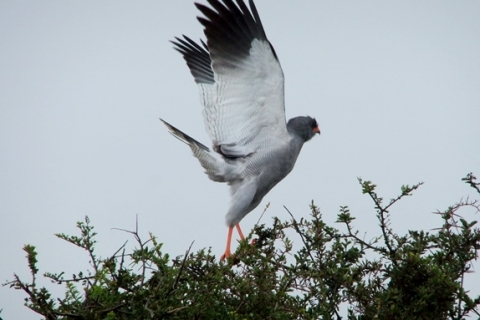 A flag moment in the life of the pale chanting goshawk; wings fully stretched, it stands upon a tall perch in the Addo. Much in shades of grey, the feathery garb becomes, although lacking strong contrast against a dull sky. A wingspan of about 1,1 m allows the bird to cut a fine figure for the camera.

Besides paleness, the name indicates a melodious singing voice: a string of short piping notes is repeated, increasing both in pitch and volume before the final diminuendo. Performances are given in flight as well as perched, the concerts free. The season peaks at first light during times of breeding.

This goshawk’s diet includes smaller birds, snakes and other reptiles, hares and road kill; a little different from what one would expect from an artist.