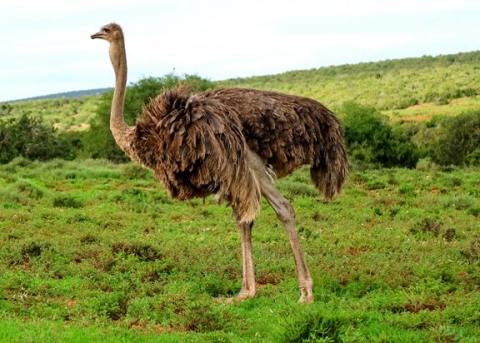 In nature the female ostrich lays about 12 eggs in a hollow scraped in the ground by the male. All his (up to five) females lay in the same nest, which may contain more than 30 eggs if hungry visitors don’t steal some; ostriches do not count so well, but the male is vigilant and severe on thieves discovered in the act.

Those eggs lying around the margin of the nest may fail to hatch if there are too many, but the ostrich does move and turn them regularly with chin and neck. She spends 42 days hatching them, sitting during the day when her feathers serve as camouflage amidst the drab surroundings of the typical ostrich habitat. Feathered wings that can’t fly still serve to cover and warm eggs, later to shield chicks from the cold. Sitting on eggs on hot days, her wings may move occasionally and feathers are puffed for airing that brings her relief from the sun’s heat.

Ostrich feathers gain their allure from the lateral strands not hooking into each other through the tiny barbules, but allowing them to hang free as fluffy secondary hairs. This benefit evolved in exchange for the inability of the ostrich to fly; the feather parts would have had to cohere for resisting the air, a lost cause in terms of body proportions.

The male sits on the eggs at night, considerate or conveniently. His black feathers, appropriate in the dark against predators and egg snatchers, now keep him warm while sleeping, free from suffering excessive heat absorption that would occur on hot days from day hatching duty. It is the wife that does the daytime hard yards, her grey feathers do lessen the discomfort by reflecting some heat from the sun.

The chicks weighing 800 grams when hatched have straw-like feathers serving as camouflage. They do not need to eat for four days and start off with their parents’ droppings, functioning similarly to colostrum in new-born mammals.

The bulge in the oesophagus visible in picture just below the head is a mouthful of food sliding down. She lifts her head periodically while eating to allow this to happen; gravity having its uses confirmed by ostrich wisdom.

And no, the ostrich does not bury its head in the sand as Pliny wrote long ago and popular belief today still has it among those not familiar with these birds. When sitting, they will lower their heads onto or near the ground  to prevent being detected (Riëtte, 2016; Goldie, 1964; Wikipedia).