Home » PARKS AND GARDENS » Addo Elephant National Park » Leafy lichen
Back to Category Overview
Total images in all categories: 12,086
Total number of hits on all images: 7,387,242 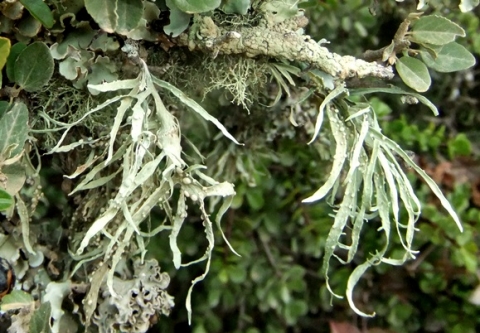 These interesting forms of leafy lichen or macrolichen were seen on old branches of shrubs near Addo. Growing on plants lichen is not that old. Lichen may become very old, however, said to be among the oldest living things on earth.

There is even technology called lichenometry, a method of dating that uses crusty rock cover lichen to determine the age of exposed rock. The estimated rate of increase in radial size of flat lichen on rock and the diameter of the largest lichen of a species on a rock surface are used to determine the duration of the rock’s exposure.

Lichen can last on rockfaces for up to 10,000 years, the maximum range of lichenometry. Accuracy within 10 percent is best for surfaces exposed for less than 1,000 years. This makes lichenometry useful, as carbon dating is less effective for dating surfaces less than 500 years old.

Lichen is a functional organism composed of two joined living entities: The green algae or cyanobacteria part of the lichen provides carbohydrates by photosynthesis for feeding the partnership, while the fungi provides protective covering from the environment, gathers moisture and nutrients and sometimes anchors the structure (Wikipedia).