Home » PARKS AND GARDENS » Addo Elephant National Park » Kudu bull
Back to Category Overview
Total images in all categories: 12,086
Total number of hits on all images: 7,387,087 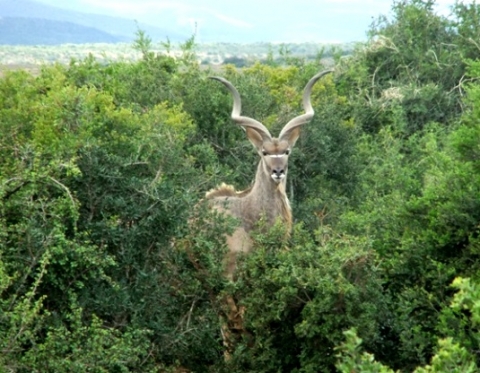 There are those that taste biltong when they see this. And many rejoice over the existence of game reserves where these magnificent animals can roam free. Almost as freely as they used to when fences, cars and cameras did not exist.

In the Addo Elephant National Park the kudu has to be watchful, for the human hunter can’t get to it but the lion can! Nature conservation does not mean animal lives are made risk free. It only removes or, more correctly, reduces the risk from people.

In the days when people were just another (threatened) species in a diverse and balanced mix of life on earth, parks were unnecessary. Since people skills, population numbers and style of using their environment, (read all environments on earth), have reached the excessive proportions of today, other species disappear due to people unless deliberately protected.

Admired and still much required species are vanishing while you read this, for human dominance on every conceivable front is still on the increase. Fortunately, the selfish human brain has discovered its dependence on natural diversity; hence a modicum of tolerance is embodied in parks.

This does not mean that those working for diversity and conservation are not competent and not working very hard? It only means that their efforts and convictions are up against an immense majority that does not (yet) understand the functioning of the earth’s biosphere or buy in on the need for conservation.