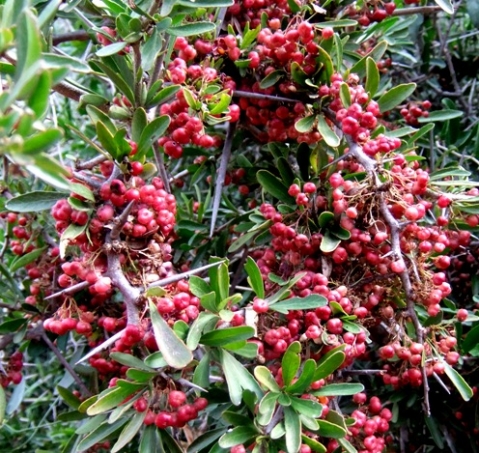 Gymnosporia polyacantha subsp. polyacantha only grows in a small part of the Eastern Cape. This photo was taken in the Addo Elephant National Park during August. The plant grows scattered in the dense scrub found here, by itself not forming thickets as its northerly relative, subsp. vaccinifolia does. The branches of subsp. polyacantha tend to droop or curve.

The bright red fruit, grown in dense clusters among the leaves are three-sectioned capsules, 3 mm in diameter. They may be seen upon the shrub from mid-April to mid-spring. One to three black seeds are produced per fruit, attached to yellow arils.

This subspecies is similar to G. karooica, but that plant doesn’t overlap in distribution, only occurring in the Free State (Coates Palgrave, 2002; Van Wyk and Van Wyk, 1997).