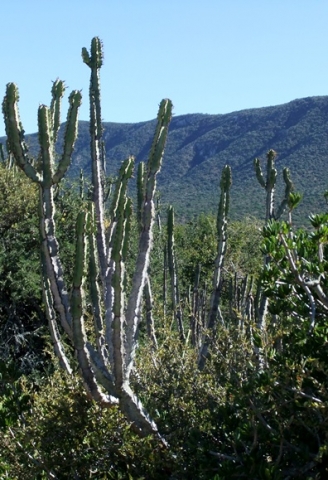 The Addo Elephant National Park and surrounds are home to some impressive old Euphorbia caerulescens shrubs.

A prolific grower, large parts of arid Eastern Cape veld is dominated by this species, the land even called noorsveld; this (and some other) euphorbias commonly referred to as noors. The species domination is strongest around Jansenville.

In the Addo type of Albany thicket closer to the sea, E. caerulescens holds its own comfortably among the strong-growing shrubbery, getting tall as well as old in the process (Frandsen, 2017).