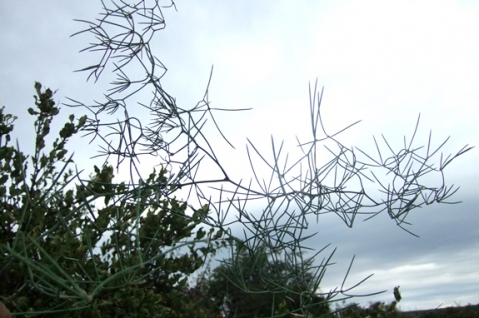 Previous
Image 4 of 36
Next

Etched against the sky, the leafless stems of Bowiea volubilis subsp. volubilis reach out in vain for support in the Addo Elephant National Park. No problem lower down; the climbing lily, as it is commonly known, is quite at home in the Albany thicket, as it is in different vegetation types all the way up the east coast of South Africa to Limpopo and beyond into the tropics.

An mostly leafless plant, the bulb was not visible here as it sometimes is when growing partly above-ground. Easy to see by the medicine-plant collectors (who would have recognised the tangle of stems anyway and know where to dig), protection in the National Park is a good thing, although not quite enough for this vulnerable and valuable plant. It is ironic that subsp. gariepensis growing in the western arid parts is not considered to be vulnerable early in the twenty first century.

Assuming several hues of green in the much-branched stems, August was too early for the spring and summer flowers. The yellow-green miniature lily flowers of the climbing lily forming a somewhat unlikely part of the Hyacinthaceae family have six spreading tepals and stamens in the monocot fashion.

There is more on this plant in the Climbers Album on this Site (Smith and Crouch, 2009; http://redlist.sanbi.org).