Home » PARKS AND GARDENS » Addo Elephant National Park » Azima tetracantha and some Schotia
Back to Category Overview
Total images in all categories: 12,086
Total number of hits on all images: 7,387,077

Azima tetracantha and some Schotia 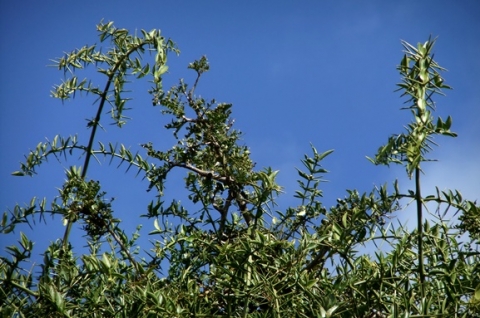 Previous
Image 3 of 36
Next

Albany thicket is a dense woodland ecoregion of the Eastern Cape, named for the Albany district where much of this vegetation is concentrated. Protected in the domain of the Addo Elephant National Park near Port Elizabeth where vigorous elephant lifestyle impact is prevalent, the thicket vegetation is not threatened as long as the elephant population is managed.

Thickets were established on the well-drained sandy soils of the plains and wide river valleys of the region, including the Great Fish River, the Sundays and the Gamtoos. Vulnerable to fire and grazing, earlier thickets have disappeared from the open plains in favour of farming and other human endeavours.

Restricted to the picturesque valleys, the thickets enjoy shade in some areas, causing some cooler summer conditions, cold in winter. The climate is dry, the vegetation characterised by thorny shrubs and undergrowth of creepers and succulents. Deeper inland it loses some density and height.

This vegetation requires strong bodies like elephants to push routes through the branches. Their thick skins are especially needed for the task where Azima tetracantha and its spiny friends have to be negotiated.

In picture, growing in close proximity or entwined with the non-spiny but tree-like Schotia, a very resistant barrier is presented in many places for thwarting the movement of bigger mammals and people. The neighbour's leaves appear too large for Schotia afra, maybe it is S. latifolia rather, which is found in the region (Coates Palgrave, 2002; Pooley, 1993; Wikipedia).