Home » PARKS AND GARDENS » Addo Elephant National Park » Azima tetracantha and sombre greenbul
Back to Category Overview
Total images in all categories: 8,984
Total number of hits on all images: 3,986,378 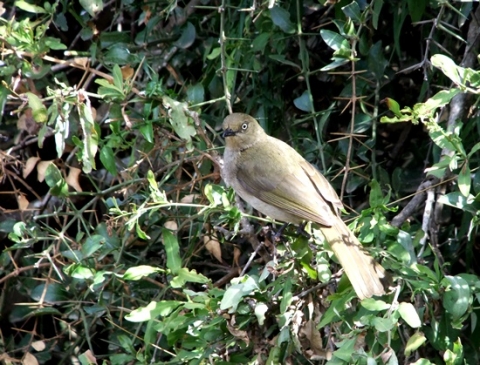 Previous
Image 2 of 36
Next

One would think special landing skills are called for when a bird lands on an Azima tetracantha branch. This sombre greenbul or sombre bulbul, in Afrikaans gewone willie and scientifically known as Andropadus importunus, has clearly mastered the technique, avoiding the fearsome whorls of four long spines spaced up the stems. The dry branch in picture illustrates the danger, although the birds are comfortable to sit on live stems where the leaves partly mask the threat.

Interesting that the species distribution of A. tetracantha and the sombre greenbul in South Africa are roughly the same: From the Western Cape along the coast across the Eastern Cape and KwaZulu-Natal, then along the lowveld of Mpumalanga and Limpopo. Neither species is threatened in its habitat early in the twenty first century.

The bird dwells in forest and coastal bush, often keeping to the foliage in dense thickets where they live alone or in pairs. This shy or private bird nests on forest and thicket margins, the female tending to desert her nest if disturbed.