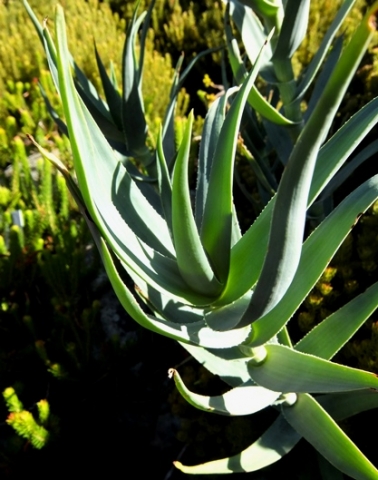 Aloiampelos tenuior, previously Aloe tenuior var. viridifolia, the green-leaf fence-aloe, used to be considered a rare plant of mainly the subtropical southeast coast of South Africa when the varieties of this plant were still recognised. Kirstenbosch had a sign next to a var. viridiflora plant that indicated the plant's listing in Appendix II of CITES, prohibiting international trading of it without a permit. Lumping the varieties solved the problem of rarity.

At least six subspecies of this profusely flowering Aloe, now Aloiampelos, are mentioned in the old literature. The List of Southern African Succulents of 1997 recognises none of them.

A. tenuior is distributed in a broad coastal belt from the Great Fish River in the Eastern Cape to southern KwaZulu-Natal, as well as in a small inland area of Mpumalanga overlapping into neighbouring Swaziland and KwaZulu-Natal.

A. tenuior grows in Suurberg shale fynbos near the Addo Elephant National Park (and other habitats). It is yellow-flowering. One of the red-flowering ones used to be called A. tenuior var. rubriflora.

Tiny white teeth are visible upon the margins of the glaucous, tapering leaves in the photo, spaced with diminishing internodes towards the stem tip. The variously curving leaves are long, narrow and succulent, the upper surfaces concave, the lower ones convex (Van Wyk and Smith, 2003; Wikipedia).