Home » TYPES » Parasites » Viscum obscurum
Back to Category Overview
Total images in all categories: 10,366
Total number of hits on all images: 5,071,773 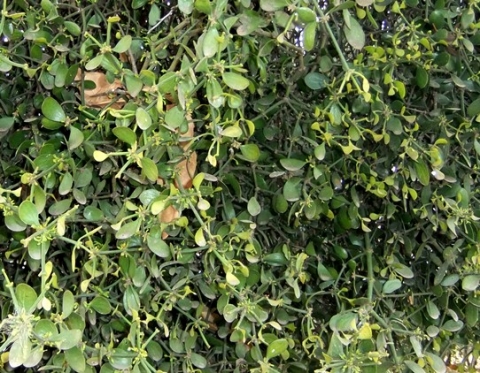 This leafy parasite seen in the Addo Elephant National Park is thought to be Viscum obscurum, yet another mistletoe or voëlent. Much branching results in a dense tangle of opposite leaves and green stems that become woody.

The rounded clump occurs in various host trees from Swellendam eastwards along the coast through the Eastern Cape, KwaZulu-Natal and the lowveld of Mpumalanga and Limpopo, as well as across the border in southern Africa. The species is not considered to be threatened in its habitat early in the twenty first century (Moriarty, 1997; Bond and Goldblatt, 1984; iSpot; http://redlist.sanbi.org).